quite clearly our own politicians are OUR-ENEMY-WITHIN drawing salaries for meaningless non jobs, squandering expenses and enriching themselves to levels of obscenity on a par with The Eastern Potentates of old.

Consider the penniless Mandelson who lied to get his first mortgage not so long ago and borrowed the balance from his chum in government as an undeclared loan! Now buying an £8Million pound home for himself and his alien boyfriend Renaldo.

Consider the huge wealth accrued at our expense by the war criminal liar and criminal Tony Blair including 4 homes of £1M+ each on estimated at £7M and a £multi Million Country Estate + £many Millions in off shore banks in his and his wifes's names.

Then consider the risible sentences handed down to politicians of Westminster who were caught red handed stealing public money - trash like Gorbles Mick enobled rather than prosecuted and the speakers present doxy acting like a two bit tart on TV bringing Westminster and politics into disrepute - IF that is possible.

These are totally untrustworthy people on almost every level - OUR-ENEMY-WITHIN!

Look in the mirror Dougie - by Richard...

No further comment needed. These people have no self-awareness. 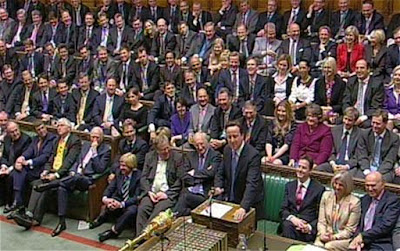 Rather ironic, all those "tough guys" calling for the Army to be brought in to deal with the looters ... when it turns out that amongst the biggest looters of them all are the military top brass - one helo trip equivalent to two wide-screen plasma TVs (PTEs).

Mind you, there is little new about this. The Brass have a history of ripping off the taxpayer – here, to the tune of nearly 1,700 PTEs .. for the servants (many, serving soldiers). That, it seems, is in addition to the 1,200 PTEs for the limousines .. call it 3,000 plasma TVs, including discount.

Success, it seems, it being able to sit in your luxury office and get your serfs to do your looting for you. Why bother breaking windows when one can delegate your looting, and do it wholesale? One can even get the loot sent directly, or get one's servants to pick it up for one.

Much fuss is being made of OUR British football team maybe having to wear The EU Logo on their kit and the British athletes in the quite farcical Olympics laid on for Politicians and their lackeys to travel all over the world at public expense for endless jollies and of little or no interest to the public at large, only a small percentage of whom are left with enough money to buy a ticket let alone ‘Attend The Games’ after they have paid for all the useless parasites and politicians to attend!
Just howmany people could remember, with any certainty the names of the first 3 people in three or more events from the Olympics in China or Australia.
Are we REALLY concerned if our footballers and athletes are branded with The EU Logo?
I am but in real terms who else is?
Consider for a moment – just who does care when you have heard no clear complaints about OUR Golfers being branded EU and swathed in EU Logos in every camera shot & their WAGs being official brand leaders: 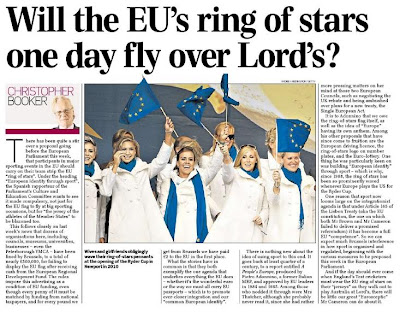 
This is by no means a first, nor even uncommon - though few will remember, other than readers of Richard North’s blog EU Referendum – in 1936 OUR British Football team having defeated Germany 6:3 was happy to use The Nazi salute to the hosts of the Olympics!
It is of course not just our sports men and women who are OUR-ENEMY-WITHIN as few will remember the support given to those 1939 Nazi Games by The Fabians and that doyen of the then Liberal Left the Mss Mitford who attended as guests and indeed fans and supporters of Herr Hitler. Of course it was not just the left that was OUR-ENEMY-WITHIN as Edward Heath attended with a young ‘friend’!
Nor was it just OUR politicians of that era who were OUR-ENEMY-WITHIN some may remember: 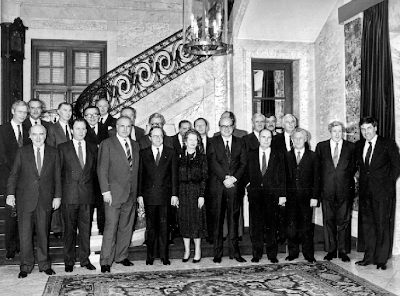 and look who is center stage!

Many will conveniently wish to forget that at that EU summit the joint declaration announced:
" that they wanted to strengthen Europe's identity and image amongst its citizens and throughout the world", and an ad hoc working party on a People's Europe was set up.

The working party was chaired by the former Italian MEP, Pietro Adonnino, and its task was "to propose measures likely to strengthen the Community's identity and promote a Europe without internal frontiers", from which emerged the second Adonnino report, presented to the Milan Council of 29 and 30 March 1985. Embedded in that report was this section:
5.9. Sport

Since ancient times sport has been an important forum for communication among peoples. It is an important part of the lives of a large number of people within the Community. That is why it is all the more regrettable that the enjoyment of international competitive sport has been drastically marred recently by hooliganism. The Committee has therefore considered both of these important aspects below.

(i) for certain sectors of sport, organization of European Community events such as cycle and running races through European countries;

(ii) creation of Community teams for some sports to compete against joint teams from geographical groupings with which the Community has special links;

(iii) inviting sporting teams to wear the Community emblem in addition to their national colours at major sporting events of regional or worldwide interest;

(iv) exchanges of sportsmen, athletes and trainers between the different Community countries, to be encouraged by programmes at the level of the Community and the Member States;

(v) support for sporting activities especially for particular categories of persons, such as the handicapped. Student sport activities should be organized in conjunction with the twinning of schools and towns.
From this emerged the idea of the Ryder cup, with its European team. Since then, though, the idea has stalled, but sport is now an EU competence under the Lisbon treaty. Thus, armed with new powers, the commission is now seeking to "develop" the principles set out in the 1985 Adonnino report.
This, of course is not the first organisation to use sport as a means of enhancing national identity, as we saw in 1936, when Hitler tried the same thing. Now that the "colleagues" are so keep on fostering their own version of the "European idea", it was always inevitable that they should try the same thing.
Some may even remember names like Max Stradelmeir and Hinterstroiser who were competing for Olympic Gold to be the first Germans to climb Eiger Nord Wand.
Never be in doubt – it is NOT The EU that is our enemy it is our own politicians, Snivil Cervants, the self serving, footballers, cricketers, athletes and their various parasites who are all too willing to sell out for their own gain their Country, its values and its peoples clearly it is they who are OUR-ENEMY-WITHIN who are sadly aided by complacency, apathy and indifference of all too many people.
Those betraying us as OUR-ENEMY-WITHIN who demean and squabble for personal gain and aggrandisement with little commitment and continuity – those who promote any willow the whisp conspiracy or claim without doing all they can to provide the underpinning facts.
Those who leap to new distractions that lead people off of the main trail of exposing OUR-ENEMY-WITHIN who then squabble and bicker using any excuse to promote sabotage of the core issues of OUR-ENEMY-WITHIN and undermine those seeking to expose and address OUR-ENEMY-WITHIN, whilst flag waving and distracting when the occasion suits them.
Individuals, whether that is YOU or I are complete irrelevances in defence of the values and liberties our ancestors were prepared to give their lives for.
Regards,
Greg L-W.
~~~~~~~~~~#########~~~~~~~~~~
INDEPENDENT Leave-the-EU Alliance


Please Be Sure To
.

.
Re-TWEET my Twitterings
& Publicise My Blogs